There are a lot of misconceptions out there about hiking in bear country. Some of them come from negative headlines about bear encounters, some come from misinformed friends, and a small fraction undoubtedly comes from the genius minds at Hanna-Barbera Productions with Yogi Bear.

There’s no reason to be afraid of bears if you’ve got the right information and the right gear.

Don’t get me wrong, they deserve healthy respect and you should always take precautions when hiking in bear country. Even black bears can weigh in at over 500 pounds!

If I’m being honest, the thought of bears walking around my tent used to keep me up at night. Nowadays, the only things keeping me from blissful backcountry sleep are snoring and an overactive bladder. I don’t have any tips to help with those two, but I’ve got plenty of bear safety tips, so keep reading. 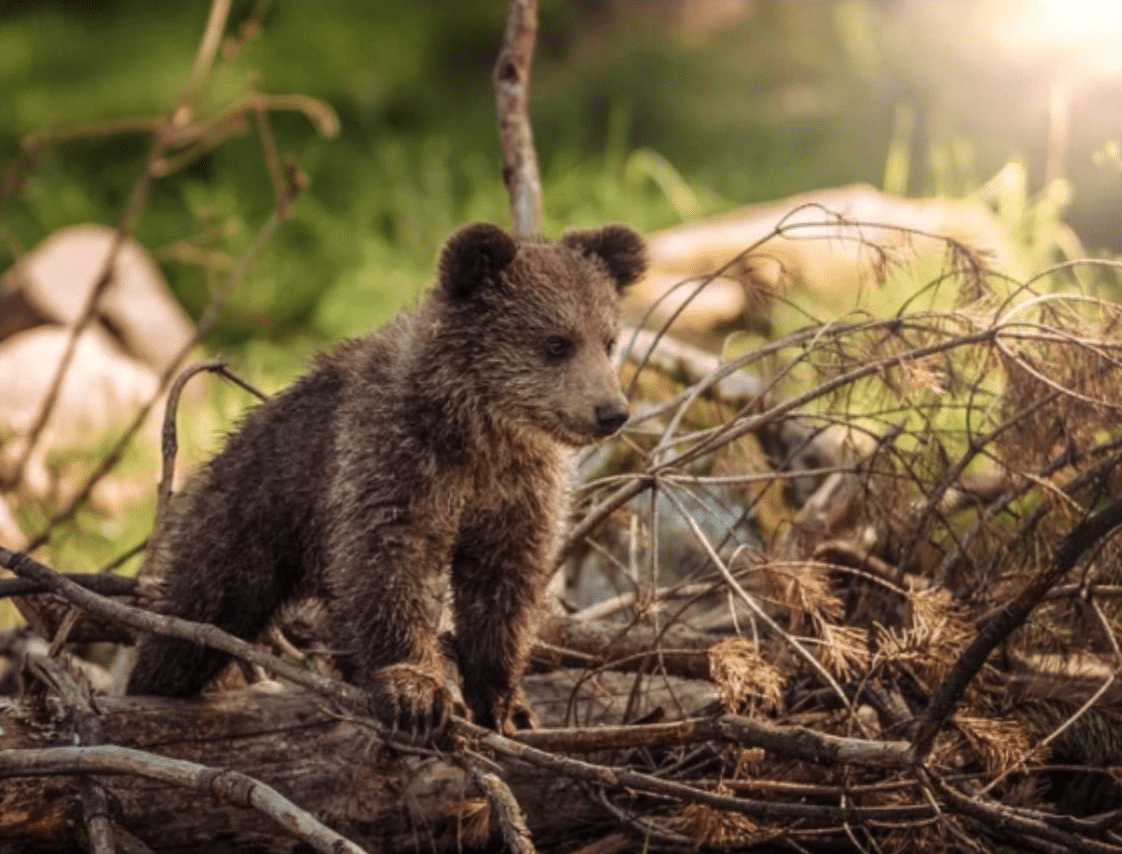 The Chances of a Bear Attack

According to the National Park Service, the likelihood of you being injured in any form by a bear of any kind is about 1 in 2 million. To put that into perspective, here’s a list of things that are more likely to happen in your lifetime:

Want even better odds than that? Start by letting bears know where you are.

Bears are inherently skittish and afraid of humans. 99.9 percent of them will avoid any interaction they can, so you want to let them know you’re coming down the trail by making some noise.

If you’re with other hikers, talk amongst each other nice and loud. My friends and I also like to clap our hands at random intervals, and occasionally one of us will shout “WHOA BEAR” just for the hell of it. They all get the job done, so just make some racket.

Should I worry about bears while hiking or camping?

You should always be aware of bears outdoors. In the National Parks system, there are signs posted that say “Be Bear Aware.”

The best way to avoid interactions with bears while camping or hiking is to understand the basics of bear behavior. They are inquisitive, smart, wide-ranging animals that have adapted to survive in various conditions.

Their sense of smell is better than any dog, and therefore multitudes more sensitive than the human nose. It’s been reported that on a day with a clear directional wind, bears can detect a pungent meal from 20 miles away.

Male bears have large home ranges, which means they roam far in any given season — from forests, meadows, mountains, and valleys, to coastal areas and even backyards with bird feeders.

Both black bears and brown bears are omnivores, meaning they eat a diet of both animal carcasses and plant foods. Black bears spend most of the summer feasting on berries, nuts, and ants in the northeast. This scenario may result in wildlife officers stepping in to avoid any further problems.

How to Avoid Bears While Camping

The first step to keeping bears out of camp is keeping any food or scented items (think soaps, sunscreen, lip balms, etc.) away from camp when not in use.

That means keeping all of your smell-good items (plus any food trash… trash still smells good to bears) at least 100 feet away from your tent.

A growing number of parks and public lands now require backpackers to carry a bear-proof container with them for storing these items. Even if they aren’t required, bear canisters are still your best option (more on those below).

Hanging food in a waterproof bag used to be the gold standard for bear safety, but bears are fairly smart and extremely motivated to eat human and pet food, so this method is really a worst-case scenario now.

Still, if you’re going to hang a bear bag, make sure you get it at least fifteen feet off the ground and at least five feet out from the trunk of the tree.

Of course if you’re staying in a designated campsite at a campground with bear-proof storage boxes available, those are your best option. No rope to fumble with, no canister to pack and unpack, just throw everything inside and forget it.

It’s also a smart idea to do all of your cooking 100 feet away from camp as well. A bear’s nose is stronger than some dogs, and can still smell food odors from dinner long after the pots and pans are washed.

As far as gear goes, there are a few key items to consider when hiking in bear country.

Bear canister: As we mentioned above, a bear canister is the best way to keep your food and your campsite safe. They’re a little heavy and bulky, but they come in backpack-friendly sizes (and double as a camp stool).

Bear bag: Bear bags are made from tear and puncture-proof materials, and are an alternative food storage option to canisters in parks that don’t require them. These are much lighter and packable than a bear canister, but they won’t protect your food from being crushed.

Bear spray: Having bear spray (extremely strong pepper spray designed for deterring bears) within reach gives you an extra layer of protection in the event of a bear encounter. Counter Assault is most hikers’ bear spray of choice, but any spray that meets The Interagency Grizzly Bear Committee’s (IGBC) standards will work.

What to Do If a Bear Approaches You

While the rules for avoiding bears are universal, what to do if you happen to run into one depends on the type of bear.

You’ll treat a black bear differently than you would a brown bear, so here’s the breakdown for each.

Unless you’re hiking in Alaska or Montana and their neighboring states/Canada territories, chances are any bear you run into in North America will be a black bear. Black bears can be other colors though (including brown) so check any area you travel to and learn how to tell the difference.

Black bears are by far the more skittish of the two types, so if you cross paths with a black bear, your first reaction should be to scare it away.

Get your arms in the air (trekking poles too if you’ve got them) and start waving them around. You want to make yourself look as big and scary as possible. Make as much noise as you can (again, a few “WHOA BEAR!” chants come in handy here).

You’ll want to slowly back away from the bear as you do so (not turn and run) to avoid triggering any chasing instinct.

If the bear doesn’t take the hint and keeps coming in closer, now would be the time to break out the bear spray if you brought it. Know the range of your spray and don’t use it before the bear comes inside that distance.

If you happen to fall into that 1-in-2 million minority and the bear still decides to attack you, always fight back when dealing with a black bear. Bear attacks can be fatal, so fight dirty and use any and everything at your disposal including your pocket knife if push comes to shove.

Encounters with brown bears require a little more finesse. If you encounter a brown bear in the wild, your main goal is not to scare the bear.

You want to do everything you can to be as unintimidating as possible.

Face the bear, but don’t look it in the eyes. Speak to the bear in a calm voice while slowly backing away. Again, never turn your back on a bear and never run away.

If a brown bear continues to approach you (or charges you), now is the time to use bear spray if you brought it.

If you didn’t carry bear spray or your bear spray didn’t work, it’s time to play dead. Drop to the ground and cover the back of your neck with your hands to protect it. It’s important that you lay on your stomach to protect your vital organs. Having a backpack on adds an additional layer of protection in that regard.

If the bear manages to roll you over during the attack, continue rolling until you’re back on your stomach. You want to keep returning to the “protected” position until the bear loses interest and goes away. As you can see, prevention and protection are our main focus when hiking in bear country. The odds are already highly in your favor, and following these best practices only makes them better.

I want you to stay out of the headlines. Don’t become the next Grizzly Man.

If you do make the news, I want your headline to be something so incredibly boring only I would read it. A few suggestions:

You get the idea. Make your own headline and make it a safe one.

READ NEXT: 9 Things To Know If You Get Lost Hiking