Around 4.02 million people visit Yellowstone National Park annually, the nation’s longest-standing national park. Most travelers arrive at the park during the summer months of June, July, and August, which is a wonderful time to view the area’s amazing wildlife. Within the park’s borders, there are a recorded 300 species of birds, 16 different fish, six species of reptiles, five species of amphibians, and 67 species of mammals at Yellowstone.

The wolverine and the lynx can be found here, although visitors are very unlikely to see one of these elusive forest lurkers. Today we’ll discuss five of the more common species that roam the park, from its lush valleys to high peaks.

These must-see animals are charismatic, great for photographing, and with a little background information, will be easy for you to find on your trip to Yellowstone National Park.

Bison are an incredible comeback story and a cherished symbol of the old western plains. By viewing a Yellowstone bison, you are getting a first-hand look at an animal that was once on the very brink of extinction. There are two distinct bison herds in the park, separated into the larger northern herd and the smaller central herd, totaling about 4,600 individuals. In the summer, they are most often observed grazing in grasslands and lowlands, and in the winter may move into areas along the Madison River to feed on grasses and sedges.

Although bison may appear slow and cumbersome, these huge animals (weighing 1,000-2,000 pounds) can run 30 miles per hour and can be aggressive if provoked. Never approach a bison; take photographs from a safe distance. Visit Hayden and Lamar Valleys at either dawn or dusk for your best chance at viewing one of these giants.

Elk are one of seven native ungulate species to roam Yellowstone and are the most abundant large mammal in the park. Summer is the best time to observe these elegant animals, when the number of elk in the park reaches as high as 20,000, dispersed into six or seven unique herds. Autumn is the elk’s mating season, called the rut, and is when they disperse into northern areas like Mammoth Hot Springs and reaches around the Madison River. As winter arrives, much fewer elk remain within the park boundaries as they migrate further north.

A male elk’s large antlers make them an incredible sight to see and photograph. These animals are grazers, often feeding in grasslands but moving into other areas to find aspen bark, conifer needles, sedges, herbs, and shrubs, as well as wet areas in search of aquatic plants.

Although not as numerous as elk or bison, the bighorn sheep is a remarkable creature to observe maneuvering the rocky slopes of Yellowstone’s mountains. There are around 350 individuals in the Yellowstone area, in the summer months, they can be seen on the slopes of Mount Washburn and along Dunraven Pass between Canyon Junction and Tower Junction. They’ve also been observed using the eastern Absaroka mountains and the cliffs along the Yellowstone River.

A bighorn sheep can live around 10 years, and both males and females of the species grow horns. The size of an animal’s horns influences its rank and position of dominance within the highly relational herds. These animals are not to be confused with mountain goats, which are a non-native animal to Yellowstone that have moved into the northern reaches of the park somewhat recently.

Since bison are on our list of must-see animals, this co-occurring mammal should be included, too. To catch a glimpse of these busy, communal, and sometimes hysterical small mammals at Yellowstone, you’ll have to be in the park in the summer months. Ground squirrels hibernate for long stretches of winter. Yellowstone is actually home to two species of ground squirrels: the golden-mantled and the uinta. The uinta ground squirrel is active at all times of the day, but in spring as the weather warms they may be more active above ground in the afternoon and early evening.

The squirrels are commonly observed along Mammoth Hot Springs, in Lamar Valley, and along the Madison River, very often using the same grasslands as the bison herds. Golden-mantled ground squirrels are often seen in the mountaintop meadows of Mount Washburn. Ground squirrels live in communities and build underground burrows. They are omnivores, mostly eating grasses, forbs, mushrooms, and insects.

Pronghorn are beautifully marked ungulates that roam Yellowstone in herds. There are around 500 individuals in the park, most often found grazing sagebrush and other shrubs in the grasslands.

Both males and females have horns, but the males’ are pronged (curved at the tip) and are much larger at around 10 inches. This species is of special concern in Yellowstone, where historically they could be found in much greater numbers. These nimble deer-like animals can sustain sprints of 50 miles per hour and are equipped with excellent vision to avoid predators like coyotes.

In the summer months, fawns are grazing and growing within the herds of Lamar Valley and near the North Entrance. By the time winter weather arrives, the best chance at seeing pronghorns are the stretches between the North Entrance and Reese Creek (a linkage between the Yellowstone River and Cache Lake; the northern end of the creek is intersected by Old Yellowstone Trail S).

Remember that this compilation is just a small number of the charismatic wildlife you might encounter in Yellowstone National Park. There are truly endless opportunities for photography and more throughout the park, and this guide should help you prioritize a few must-visit places on your national park trip.

Pin this post, so you’ll have this intel saved when it comes time to plan your ultimate Yellowstone experience! 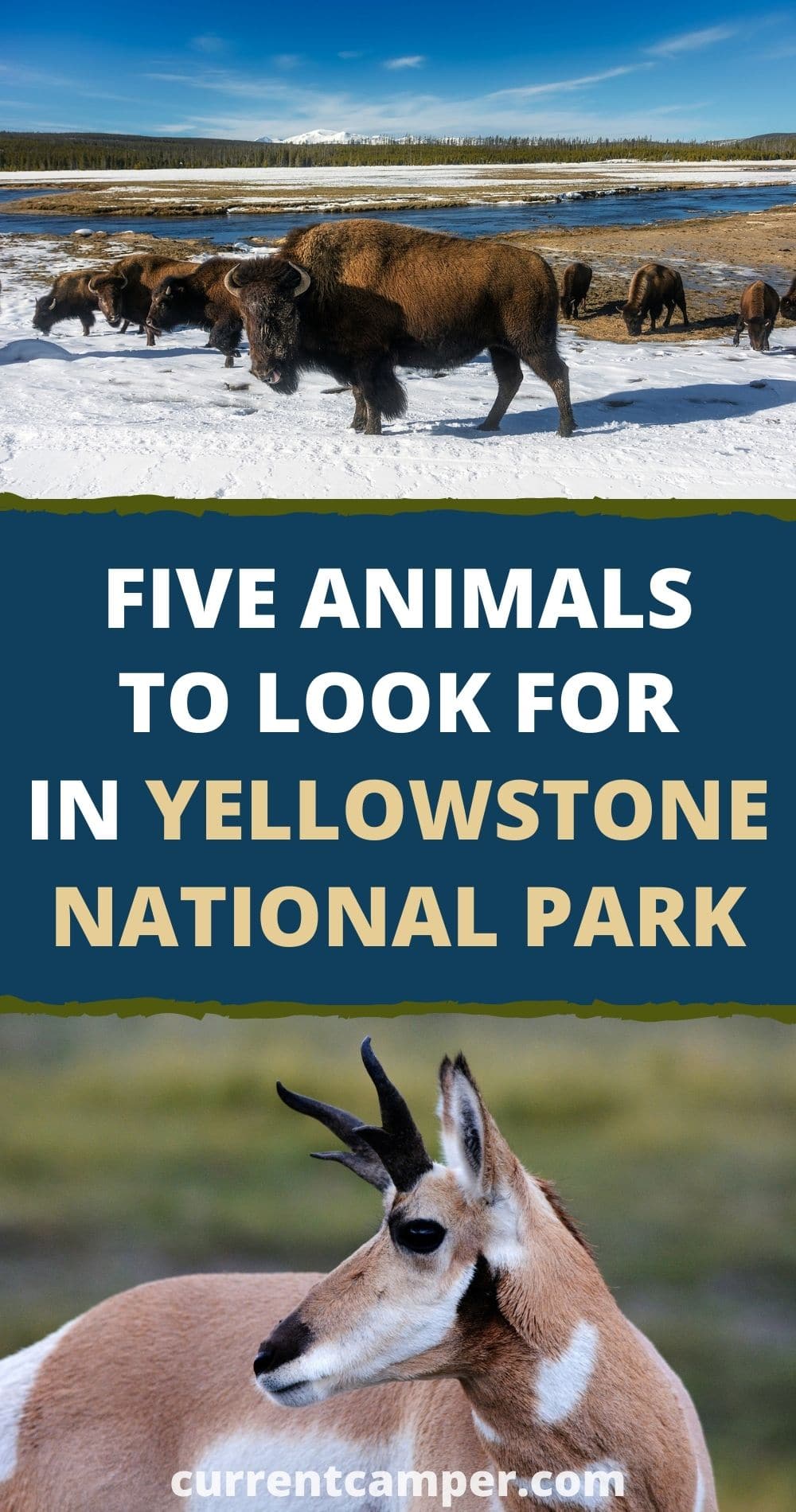