From rugged coastal scenery and dramatic waterfalls to gorgeous wildflower-filled meadows and volcanic peaks, the Pacific Northwest is home to some of North America’s most spectacular scenery. This region spanning from Oregon to British Columbia and beyond is just filled with adventurous spots to explore and hiking is one of the best ways to enjoy this diverse terrain. 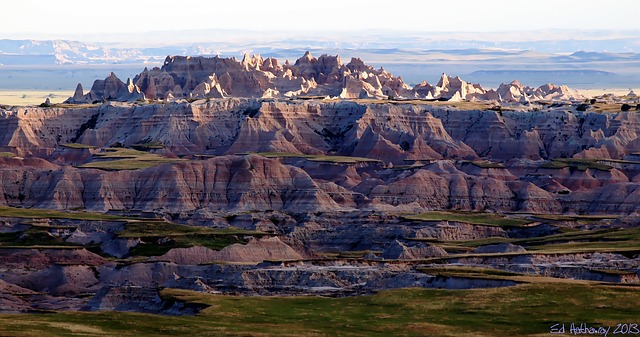 With so many stunning trails to choose from, it can be hard to choose where in the Pacific Northwest to explore first. If you’re looking for a little inspiration, we’ve put together a list of some of our favorite trails.

Framed by striking basalt formations on both sides, Toketee Falls plunges 113 feet into a large pool surrounded by gorgeous greenery. The word “Toketee” means “pretty” and “graceful” in the Chinook language, and that’s exactly what this waterfall is. It’s just a short 0.4-mile jaunt from the trailhead to the viewing platform overlooking the falls. The route passes along the North Umpqua River with plenty of water features to see along the way including a gorgeous double pothole carved by the river.

Toketee Falls is 40 miles northwest of Crater Lake and about 2 hours from Eugene. The hike is fairly easy, but there are several steps near the viewing area. Hikers are advised to stay within the safety railings, since the path down to the falls itself is incredibly slippery and dangerous and not worth the risk.

It’s a strenuous climb from the trailhead to the top of Mount Storm King, but hikers are rewarded with an incredible panorama of Crescent Lake and the valley below. The trail gains nearly 2,000 feet in a little over 2 miles from the trailhead at Storm King Ranger Station in Olympic National Park. Even if you don’t make it to the top, the hike through the often misty old-growth forest is certainly worth it and you can enjoy several viewpoints of the lake well before the summit. It’s a favorite spot for hikes in the Northwest. 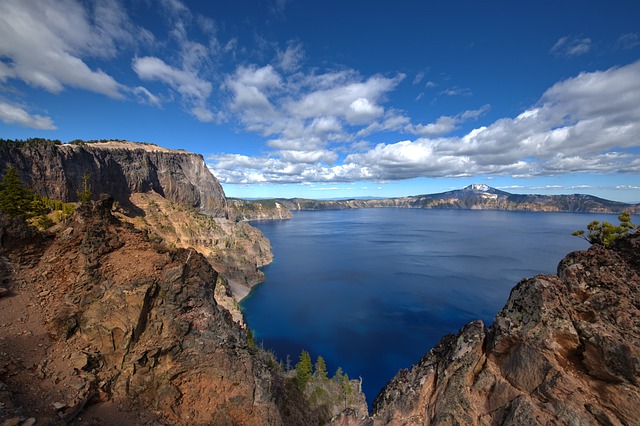 If you’re going to do one hike in Crater Lake National Park, make it the Watchman Peak Trail. This steep yet short (1.6 miles out and back) trail offers one of the finest panoramic views of Crater Lake, and it’s easy enough that it’s pretty family-friendly. The peak offers a fantastic view of Wizard Island, an ancient cinder cone leftover from the eruption of Mount Mazama around 7,700 years ago. Plus, there’s an old fire lookout perched on the summit and a small museum.

For one of the best views of the Oregon Coast and one of the best hikes in the Northwest, head to the top of Neahkahnie Mountain, just south of Cannon Beach. This peak is one of the highest points on the west coast and the summit is accessible to most intermediate hikers. It’s a moderate and steep three-mile climb to the summit and a bit of scrambling is required to reach the top. Legend has it that mysterious Spanish sailors buried a massive treasure somewhere between the base of the mountain and the top in the late 1600s. Believe it or not, people are still actually hunting for the treasure today.

Just 30 minutes outside of Seattle, the Rattlesnake Ledge Trail is a popular hike for urbanites escaping the city, as well as, visitors to the Snoqualmie Valley. The trail begins at the north end of Rattlesnake Lake and climbs for two miles to a craggy outcropping above the lake with a fantastic panorama of the surrounding mountains, forests, and the turquoise waters of Rattlesnake Lake.

This is one of the most popular hikes near Seattle so expect lots of people on the weekends, but get there on a weekday for sunrise and there’s a good chance you’ll have the viewpoint to yourself. There are some steep drop-offs and a little uneven footing on the ridge so you’ll want to keep a close eye on dogs and small children.

The Three Sisters Loop is legendary among backpackers and takes hikers on a whirlwind trip around Oregon’s third, fourth and fifth tallest mountains in the state. The Three Sisters are a picturesque cluster of volcanic peaks just west of Bend. It provides a huge variety of interesting terrain from gorgeous alpine lakes and streams to fascinating volcanic rock formations.

This 50-mile loop typically takes from three to six days to hike, or you can just head out for a northwest day hike in the Three Sisters Wilderness to get a taste of the terrain. The Green Lakes, McKenzie River Waterfall Loop and Canyon Creek Meadows trails are all great options. 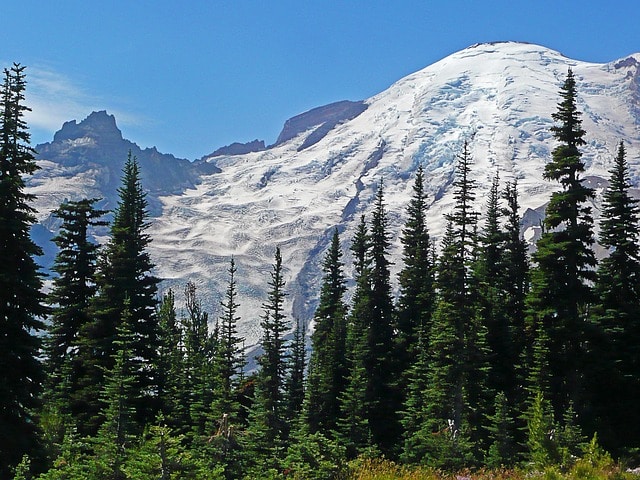 The Skyline Trail leads to one of the most beautiful wildflower-filled meadows in the Northwest – Mount Rainier’s Paradise Park. The hike begins on the southern slope of Mount Rainier and makes a 5.4-mile loop around Paradise Park. The highlight is the climb up to Panorama Point where you’ll be rewarded with a sweeping view of Mount Rainier and the South Cascades. Several trails criss-cross through Paradise Park, but they’re very well-marked. You’ll also want to pick up a trail map at the nearby Henry M. Jackson Visitor Center for help navigating the route.

What most people think of when they think of a Pacific Northwest hike is probably not the high desert landscapes of the Oregon Badlands Wilderness Area just east of Bend. The Oregon Badlands is a fascinating region filled with rugged volcanic formations, eroded lava landscapes and ancient juniper woodlands.

The 6-mile roundtrip Badlands Rock Trail provides a great introduction to this high desert wilderness area and winds through ancient junipers and hardened lava rocks. Several other trails jut out from the Badlands Rock Trail and there are several dispersed campsites available near the trailhead.

Read More: Day Hiking: What To Bring On Your Next Adventure

No Pacific Northwest hike list is complete without mentioning the West Coast Trail. This strenuous 47-mile trail follows the southwestern edge of Vancouver Island and is on the bucket list of most backpackers. The West Coast Trail passes through dense rainforest and along rugged shorelines, boasting some of the most fantastic coastal scenery in the world. The trail can be hiked in either direction, but once you begin there are very few spots you can exit the trail.

A typical journey on the trail takes anywhere from five to eight days and a permit is required to hike the trail. The West Coast Trail has quite a brutal reputation, requiring hikers to navigate several river crossings, ladder climbs and rope-assisted tidal crossings. The rewards are immense, with frequent gray whales, orcas and sea lion sightings. 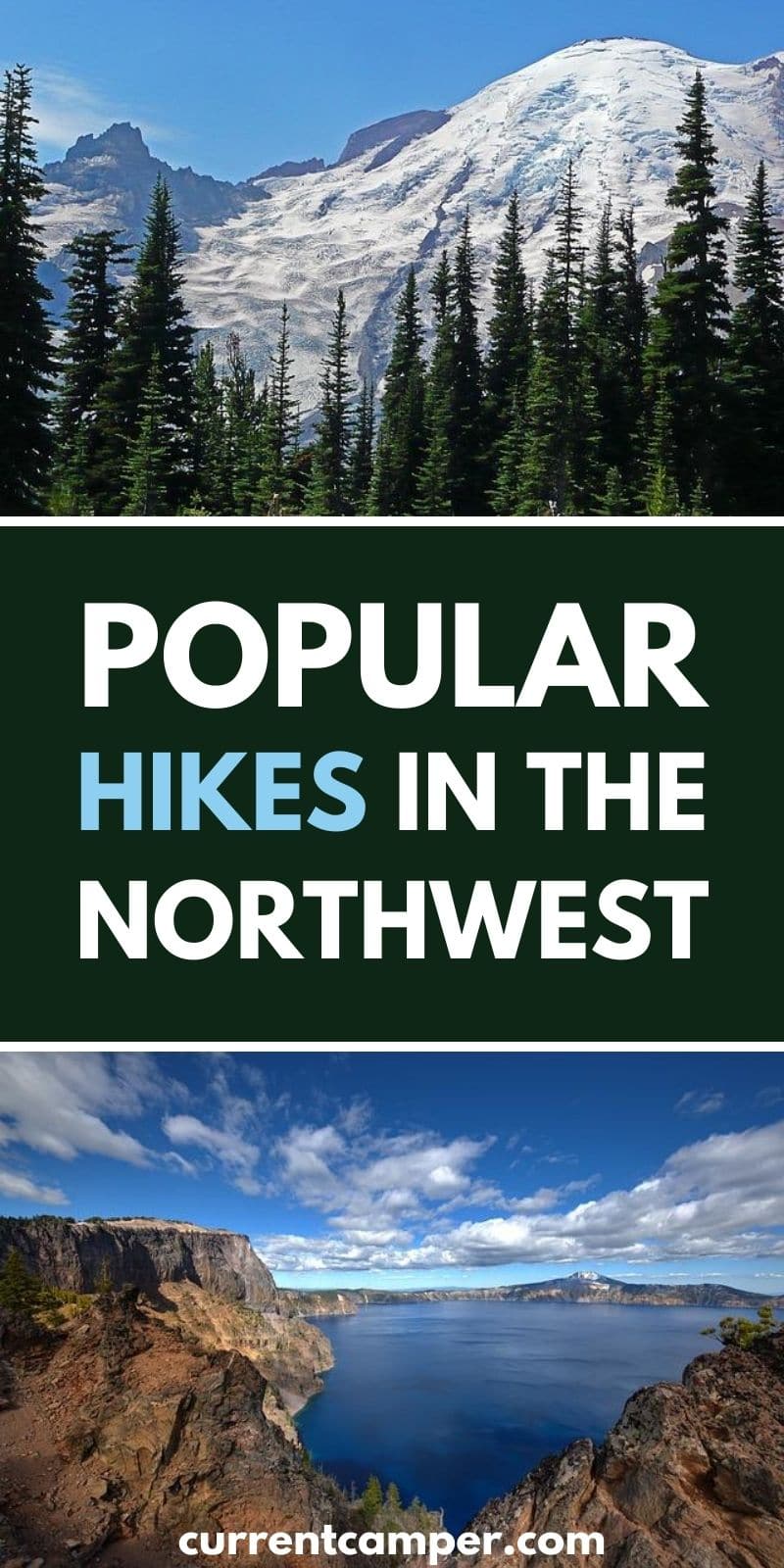