The popularity of both snowboarding and skiing remains steadfast. While two disciplines might seem to look askance at each other at times, they actually have mountains of respect for each other.

Either way, both are challenging to learn, and both require dedication. You’ll also need the determination to get to a place where you feel confident and competent in the snow. Here we will look at snowboarding vs. skiing and help you determine the differences between each.

The Basics on Snowboarding vs. Skiing

The fundamental of snowboarding is that it is a boardsport. Anyone who has a history of boardsports, be it surfing, skateboarding, wakeboarding, windsurfing, sandboarding or bodyboarding will feel an inclination to picking up a snowboard as opposed to a pair of skis. The balance is relatively similar, the flexibility is on par, and screaming down a mountain can be compared to surfing a big wave or whizzing around a skatepark.

The first skill needed is the need to understand momentum and lean forward accordingly. It is the same as dropping into a half-pipe on a skateboard — if you’re not forward-crouched to overcome the force of momentum, you’re going to fall backwards, again and again. You can’t lean too far forward when starting off on a snowboard.

Skiing is similar in that the skills are all based on the rails. Still, apart from rail work, there are many other differences. Skiing is definitely considered more straightforward to learn than snowboarding because there are two skis.

This allows for movements of both legs independently. Skiing also has the assistance of ski poles that help balance and can be used effectively to regain balance. When learning to ski, the most essential tip is your knees’ movement and understanding them as shock absorbers. Your knees absorb all the force of bumps and control your rhythm, and skiing has a lot to do with rhythm.

Snowboarding only gets real once you get out there and head for the larger hills. The most significant detriment to hitting the big slopes is the challenge of slowing down — there is nothing scarier than screaming down a massive mountain and not knowing how to slow down. It may seem counter-intuitive, but the most crucial element in learning to snowboard is learning how to slow down.

The heel edge is almost effortless because you can jam your edge in as hard as possible, and then just sit down and stop moving. Your toe-side edge is a bit more tricky, and is more challenging to manage.

The only way to get the feel of your toe-side bite is to practice it hundreds of times on small slopes when you are barely moving. Have we mentioned that helmets are an absolute necessity, no matter what you think? Well, we just said it. There is nothing worse than misjudging a slow toe-side stall and flipping on ice onto an unprotected head. Still, it is not difficult to learn how to snowboard as long as you can slow down.

Unfortunately, you can’t learn how to ski in a few hours — it takes a full commitment and a lifetime of learning. The only way to get the rhythm of skiing into your soul is to take a series of lessons.

No matter what you think you are capable of, if you are a newbie, your route to ski proficiency must go through ski lessons. At the very least, you will learn about different types of hills and the course towards your own progress, instead of making the biggest mistake most people make and trying a mountain that is just too gnarly for your expertise. This always ends in tears.

Even if you are supremely fit and agile, the ski lessons will also impart a lot of mental preparedness into your early sessions, and this is where you will make or break it. Having a scare or a big wipeout early in your learning process will take all the fun out of it, and might lead you to give up too early.

Other essential lessons in learning to ski are that it is better to have your own gear to get used to instead of lending or hiring. Once you have committed to the process of learning, head on out there and buy your own gear.

Obviously, the golden rule is that you can never ski alone when learning, and the unwritten rule is that you have to learn to be really, really patient. If you can focus on patience, it will reward you considerably further down the learning process.

Snowboarding vs. Skiing: Developing The Pattern

Once you have the basics down and you can turn and slow down off both edges, it is time to ramp up snowboarding fun. The only way you get the real skills and feel of it is when you get out of your comfort zone, turn the speedometer up, and head on out to the big slopes. There is no need to jump straight into an off-piste situation just yet, but you can quickly upgrade to the advanced slopes and hound down some powder. There is a lot of excitement when you feel your first rush of a big run over deep powder.

Skiing can be very social, and it is possible to get the whole family together when you’re all up for it and feel confident enough. Confidence is vital because even though the snowboarders don’t like to mention it, top-end skiers definitely go faster than snowboarders.

Families can have holidays with other families with skiing as the common bond, easier than snowboarding bond or group. There is a lot of fun to be had in learning to ski with family and friends. The initial snowboarding uptake is usually solo or with a tight-knit crew, and snowboarders prefer to learn by themselves and are less open to lessons, much to their detriment.

A big ski crash can result in knee and shin injuries, which are the most common. On rare occasions, injuries can be more severe.

In Conclusion: Snowboarding vs. Skiing

Learning to ski is more manageable than learning to snowboard in the initial stages. As you get more into it, snowboarding has a fast acceleration on the learning curve. After years on the slope, skiing once again climbs ahead as techniques and flow begin to take precedence. There aren’t many older snowboarders compared to skiers, which attests to your chosen discipline’s longevity.

READ MORE: Snowboarding and Skiing During the COVID-19 Era 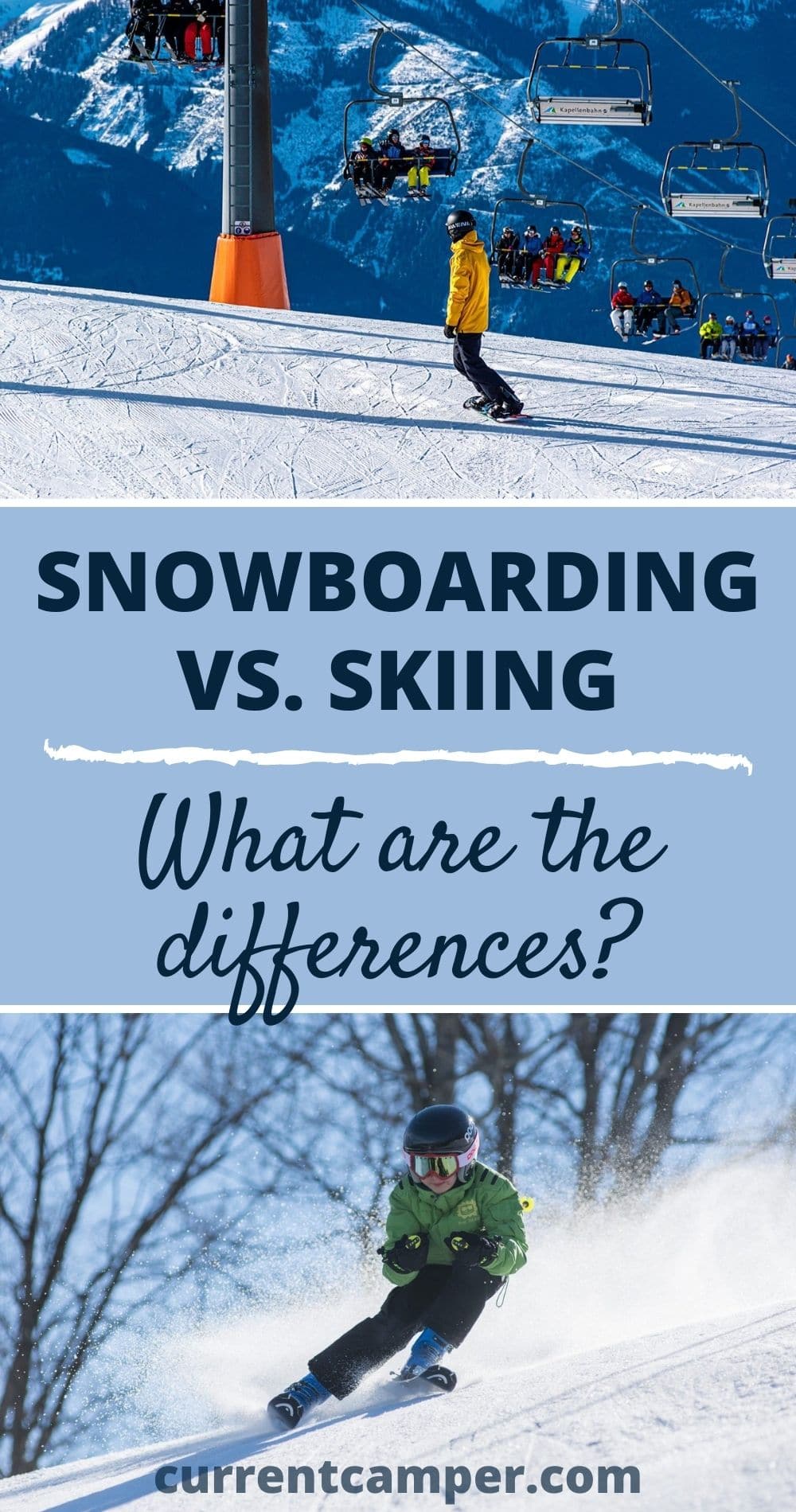 11 Best Exercises for Skiing and Snowboarding

An Introduction to Cross-Country Skiing

Everything You Need to Know About Snowshoeing