If you’re headed up to the slopes for the first time, you’re likely going to have to choose between skis or a snowboard for your first day. While you’re never stuck in one or the other, this first decision will set the groundwork for all of the learning you’ll continue to do on the slopes.

Unlike most people, I started on a snowboard and only took up skiing 10+ years into my snowboarding journey. It wasn’t that I felt I was missing out on something by not knowing how to ski, I just enjoyed the challenge of learning something new and wanted to be skilled in both. You don’t have to learn to ski before you learn to snowboard, and you don’t have to stick to just one forever.

That being said, if you’re just starting out you may want to try both and see what you prefer. Then, stick to learning one until you have a solid foundation. If you focus all your time and energy on learning one snowsport at a time, you’ll see progress much quicker and you’ll start to enjoy it more and more. Once you start getting better, you’ll probably want to continue that progress and just stick to one for a while. However, it’s never too late to learn something new!

Starting Out With Skiing or Snowboarding

Many people start on skis because it’s generally agreed that skiing is easier to learn. This is because skiing allows you to stand on two separate skis and face directly forward, which feels more natural considering most of us walk around forwards and on two legs. Because of this, it’s a little easier to balance on skis starting out. Many people start their children out on skis because they pick it up quickly and can always learn to snowboard down the line if they want to. However, you can totally go right to snowboarding and have success as well.

Snowboarding definitely has a steeper learning curve. It doesn’t feel very natural to have both feet strapped to one board while standing sideways. You’ll spend a lot of time on the ground and you’ll take plenty of falls. Don’t let your first few days deter you, though. If you stick with it and push through the frustration, you’ll slowly get better and love it more and more. It’s a great idea to wear padded shorts and knee pads under your snow pants to have a more enjoyable first day.

If you want to have more success earlier on, you might want to start out skiing. That being said, don’t go into it expecting skiing to be a breeze either. They both take lots of practice.

Don’t be afraid to spend a day trying each of them before you pick one to stick to. Keep in mind that your body will be tired and probably sore going into day two. Once you’ve tried each, stick to one so you can really progress, but know that noticeable improvement probably won’t happen overnight.

There are a few things you should consider about the different equipment that snowboarding and skiing require.

Off the slopes, snowboarding wins. Snowboard boots are much more comfortable. They feel soft and padded in comparison to the hard, tight boots that skiing requires. And ski boots can be much more difficult to walk around in. Plus, all snowboarders have to carry from the car to the slopes is their board. Skiers have to walk with two skis and two poles all while trudging around in those awful boots.

However, on the slopes, skiers have the advantage. Snowboarders have to unbind their back foot before getting on the lift and bind back in upon getting off. Meanwhile, skiers can ride right onto the lift, ride right off, ski down, and do it again. Not having to bind in saves a little time and annoyance. On top of that, skiers have separated feet as well as poles to help them get going in flat spots. Snowboarders, on the other hand, have to once again unbind and push themselves through the flat spots or hop around until they make it which can be incredibly tiring and frustrating.

READ MORE: Snowboarding vs. Skiing: What Are The Differences?

Once you’ve got the hang of snowboarding, lifts aren’t all that scary. But when you’re first starting, they can be a little more daunting for snowboarders than they are for skiers. This is because snowboarders have to unbind their back foot to get on and off the lift. So when they slide down the slope at the end of the lift, they don’t have very much control over their board with only one foot strapped in. This can be negated to a certain extent with practice, a stomp pad, and pressing your back boot up against your back binding. Regardless, skiers definitely have an easier time because they have just as much control when getting off the lift as they would going down the mountain. Some resorts also have T-bars, which can be a challenge for even the more experienced snowboarders. For most skiers, though, they’re a breeze.

Which does your crew do?

Snowboarding and skiing are often social events (though not always, many people love the solitude of enjoying the slopes alone). If you plan to ski or ride with a crew, you may want to consider which snowsport they do. You might feel left out at times if you’re the only boarder in a group of skiers or vice versa.

What kind of skiing or snowboarding do you want to do?

A great way to pick which you want to learn is thinking about your snow sport personality — what types of snow, terrain, and activities do you want to do on your board or skis someday? What sounds the most fun to you? What are you looking to get out of skiing or boarding?

If you just want to explore and take in the views, you can do this on either. However, you’ll probably reach a level that allows you to explore more of the mountain quicker on skis rather than on a snowboard.

If you dream of slashing through feet of ungroomed, fluffy, powder and doing little jumps and tricks off bumps, you might enjoy snowboarding more. Again, you can do these things on skis too, but snowboarders are known for this type of boarding.

If your goal is to hit top speeds, soaring down the slopes, you might enjoy skiing more. Although you can get going pretty quick on either, skis can typically go faster and skiers often enjoy racing down steep groomers whereas snowboarders are more likely to take their time 360-ing off of side hits.

Whether you choose skiing or snowboarding, be patient with your progression. I promise you’ll enjoy it more and more as you improve. And remember that you can always learn both down the line!

READ MORE: Should I Rent or Buy Ski Clothes? 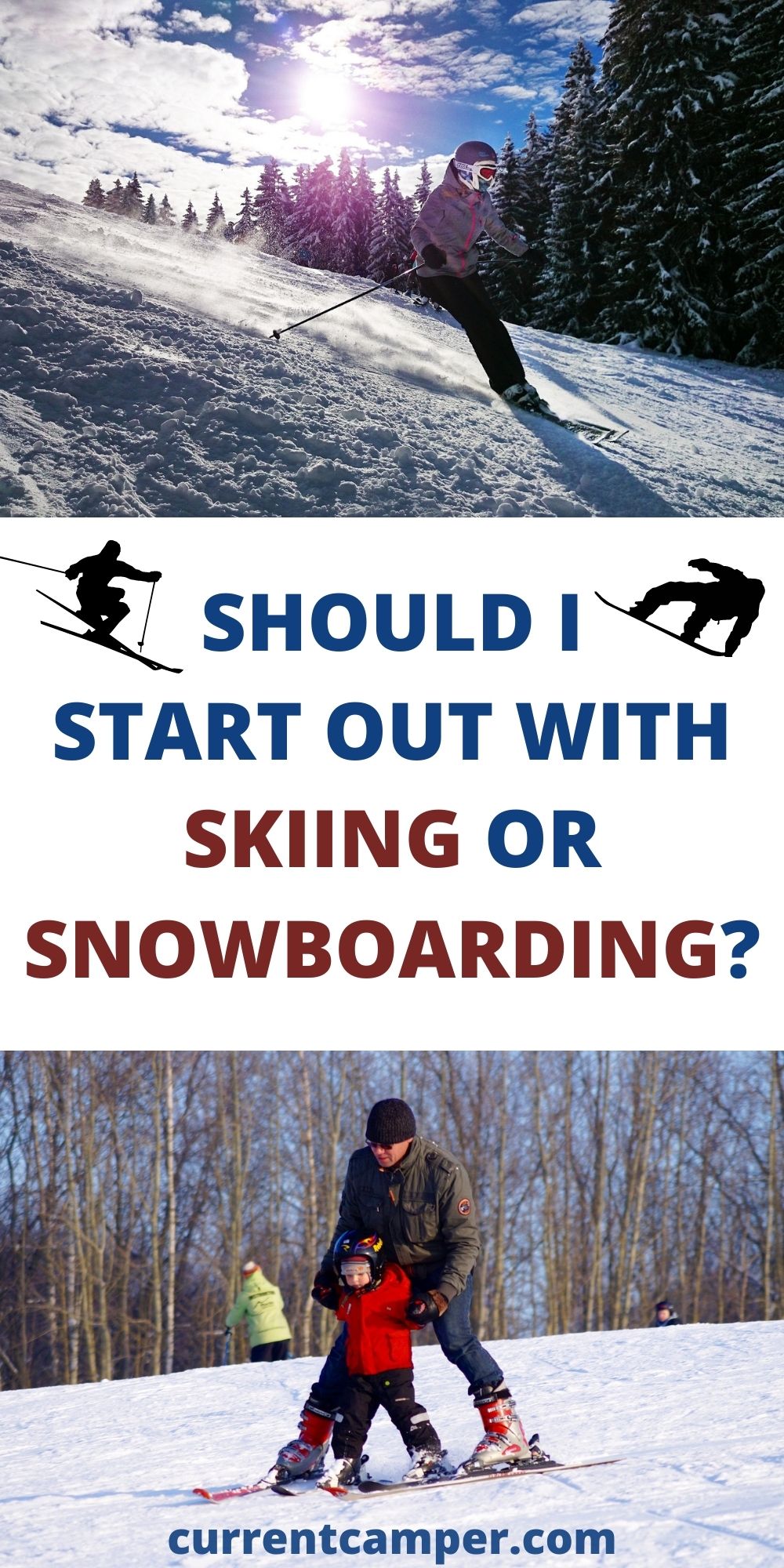 11 Best Exercises for Skiing and Snowboarding